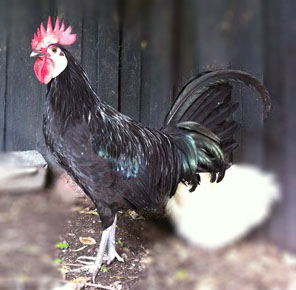 Carlo  - a White Faced Black Spanish cockerel at five months old. His white face still has some development to come!

Please note we are not currently able to supply White Face Black Spanish ad-lib. Please register interest if you would like to pre-order chicks or be notified when these chickens are available.

We breed pure White Faced Black Spanish hens for two main reasons. One is that these are a fantastic breed of unusual but stunning chickens with great character. The other reason is that this historic breed, which hails from Spain and dates at least from the time of the Romans, is now classed as critically rare in most countries including Australia. By choosing these chickens we are contributing to the preservation of this fantastic breed and its gene pool and we invite you to do the same.

Our Spanish flock is based on excellent lines from throughout Victoria. We are focusing on the development and maintenance of excellent egg laying. Our Spanish Hens should lay around 180 very large and delicious eggs per year, these should be larger than a commercial "extra-large" egg.

As our White Faced Black Spanish hens are pure-bred, a flock will all look like sisters (or in fact twins). An unusual flock of matching hens can be stunning in a garden. If you find it difficult to tell your girls apart, we can supply leg rings or alternatively White Faced Black Spanish can be kept in a mixed flock. We find our Spanish very sweet natured and adaptable to handling especially if it is done from an early age.

The White Faced Black Spanish was widely kept prior to the advent of large scale commercial egg farms but during the 20th century the breed declined massively in popularity to the point where it is now classed as rare and included in the critical lists for breed preservation in many countries.

The white faced black Spanish has an ancient breed heritage. The first record of it dates back to the Roman era, when in his accounts of the conquest of Spain, Julius Caesar described a particularly black chicken with large red combs, white faces, and a haughty carriage. The breed is believed to have been introduced into the UK via Holland, during the rule of Spain in the Netherlands. There are British records of the breed which date back to 1572 and it was one of the earliest and most popular show breeds during the 19th century after the commencement of poultry shows. Sadly in the 20th Century partly due to the decline of small scale poultry keeping replaced by large scale commercial breeding and farming, the popularity of the White Faced Black Spanish dropped significantly and the breed has now become critically rare.

We currently have very limited availability of White Faced Black Spanish hens as we are building up our breeding flock. If available, hens are priced at $70  aged at eighteen weeks (young adult)  and $45 at nine weeks ("pre-teen" hen which is not fully grown but can be be housed comfortably in a coop with sister hens without heat or special measures). Unsexed day old chicks are priced at $10. Please contact us for cockerel orders and prices.